In 1753 naturalist Sir Hans Sloane left the contents of his private library and his cabinet of curiosities to the Crown. Sloane’s collection and several others became the foundation of the museum. The Museum was established by act of Parliament and the more interesting antiquities were put on display in Montagu House, a disused mansion in London’s Bloomsbury neighborhood.

The early museum accepted or purchased materials in a random fashion; James Cook’s specimens from his South Seas voyage of 1778 ended up there, along with art, coins, gemstones, rare books and Greek, Roman and Egyptian statuary (including some confiscated from Napoleon after his failed invasion of Egypt). The museum soon outgrew Montagu House and it was demolished to make way for a grand Neoclassical building. That building has been added onto repeatedly but still forms the core of the modern museum. 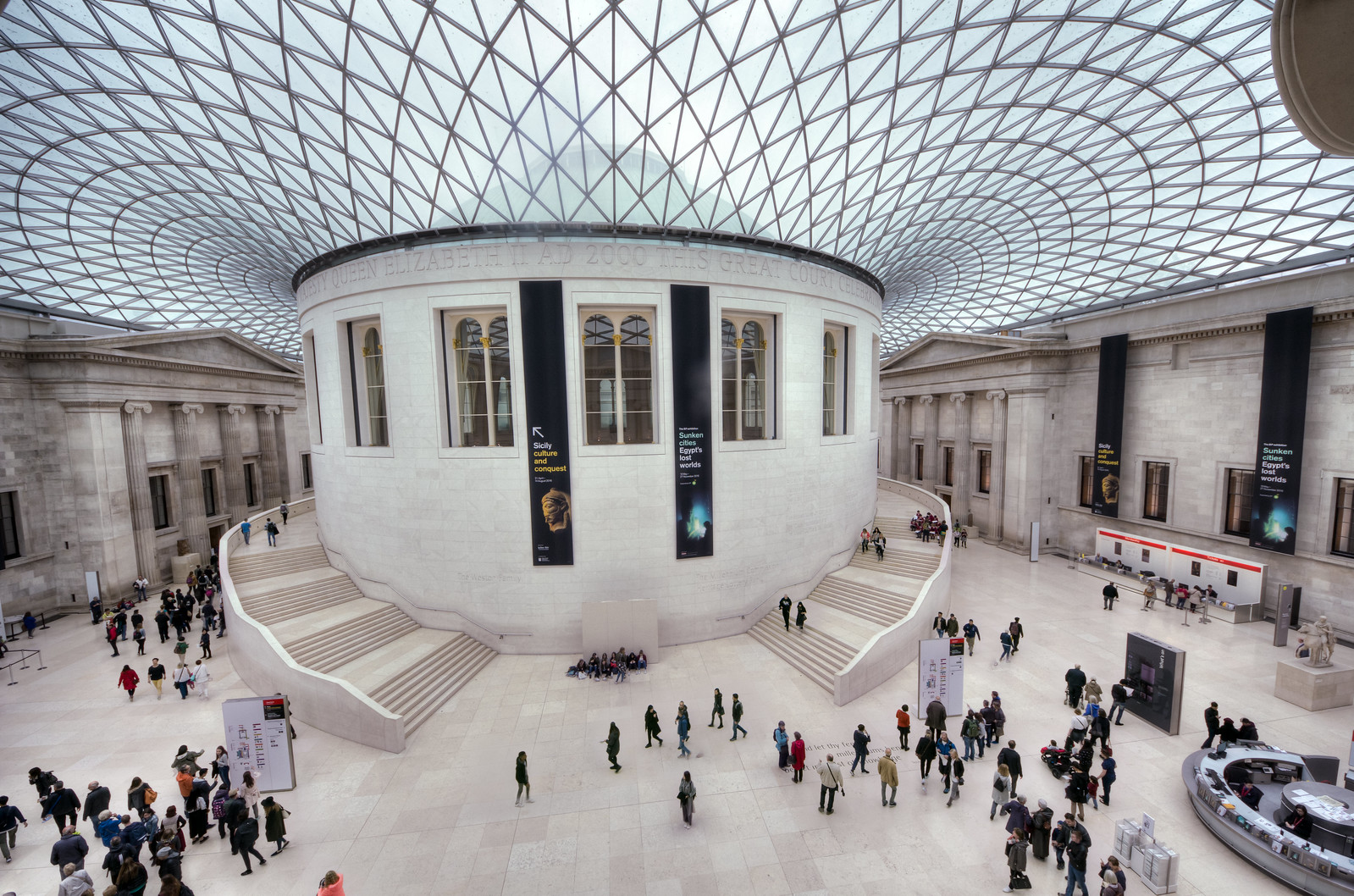 The Great Court is the center of the museum and the largest covered square in Europe. The circular Reading Room in the middle was originally part of the British Library. It’s now an exhibition space.

In the late 1800s, the British Museum finally began to focus. The Natural History collections were devolved to a satellite (the Natural History Musem) across town in South Kensington, and the parent museum launched a campaign to collect the great cultural treasures of the world. For the next hundred years, British scientists and explorers enthusiastically looted anything and everything they could from Europe, the Near East, and around the world.

Not surprisingly, many of these countries now want their artifacts back. Greece has a long-standing dispute over the Parthenon Marbles, also called the Elgin Marbles for Lord Elgin, the British diplomat who obtained permission from the Ottomans to harvest the more interesting statues and friezes from the temples of the Athens Acropolis in 1801. Egypt would like the Rosetta Stone back, and China claim over 20,000 artifacts taken during the Opium Wars. These are sensitive subjects as the artifacts in question are decidedly not British in origin.

One collection that certainly is British is the Lewis Chessmen. These exquisite game pieces were found buried in a sand dune on the Isle of Lewis, Scotland, in 1831. They are over 800 years old, probably made in Norway between 1150 and 1200 AD. 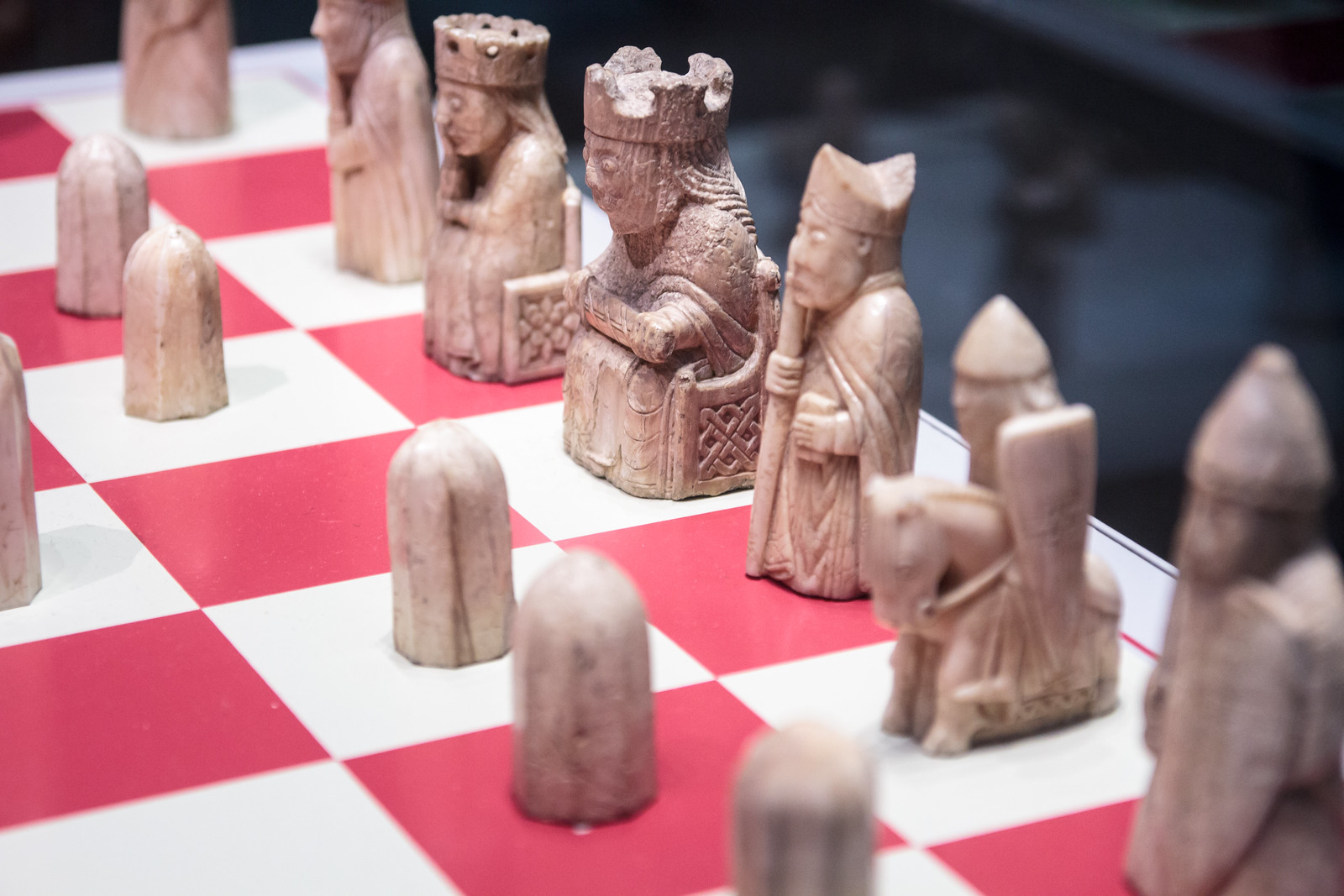 Northern Scotland was ruled by Norway at the time, and the pieces were probably buried for safekeeping by a Norwegian settler in Scotland or a trader who intended to sell them in Ireland (also a Norse possession in those days). They were carved from walrus ivory, imported from the remote Norwegian colony in Greenland, except for four pieces carved from whale’s teeth.

Chess originated in India, later spreading to the Arab world and Europe, probably through Muslim Spain. Islamic chess sets were usually abstract, rather than figurative. The pawns in the front-row are Islamic in style, while the characters in the back are finely carved. The Lewis chess set has the oldest surviving example of the bishop piece; Islamic sets had war elephants instead.

The rest of the Lewis characters are beautifully carved, tiny Norwegian warriors. The knight rides on a short-legged pony, the ancestor of today’s Icelandic horses. The rook piece is represented by a standing warrior called a warder. Four of the warders are biting their shields like ancient Viking berserkers.

While modern chess sets pit black against white, medieval sets were colored white and red. Some of the Lewis pieces have a reddish stain, suggesting they were once painted.

Interestingly, all the Lewis queens are sitting with their head propped up on one arm, palm to cheek. The meaning of this pose is not known, but in medieval chess the queen was a very weak piece, only able to move one diagonal space per turn. Maybe the artisans depicted her as worried and at the mercy of the pieces around her.

If you go to London, I highly recommend a visit to the British Museum. The Lewis chessmen are located in Room 40, on the upper floor at the south end of the Great Court.