At the beginning of May, Michelle and I went to check out the Ohio State Reformatory in Mansfield. I found it while searching one of those “things to do you in your state” sites, and of all the things to do on a cold, dreary Saturday, it seemed like the most interesting. I knew the reformatory existed, knew that it was where The Shawshank Redemption was filmed (pretty neat), and knew that it had a reputation for being haunted (yawn). I wasn’t sure Michelle would want to spend her Saturday morning at an abandoned prison, but she was completely onboard.

The Reformatory is a beautiful from the outside, huge and imposing in the Romanesque style. It was built in the late 1800s as a place where young male first-offenders could pay off their debt to society without being exposed to the horrors of the state penitentiary. We passed under the brick arch, up the wide stairs, and into the vaguely Art-Deco vestibule. It was $12 each to enter, and a few more dollars for the behind-the-scenes tour (which we left for another time).

Based on the beauty of the exterior, I was totally unprepared for what lay inside. The prison (despite its progressive beginnings, that’s what it became) is dank, menacing, and thoroughly ruined. The museum staff are working hard to restore it, but they have years of work ahead of them. Behind the well-maintained façade, the place looks looks like it’s been abandoned for a century. 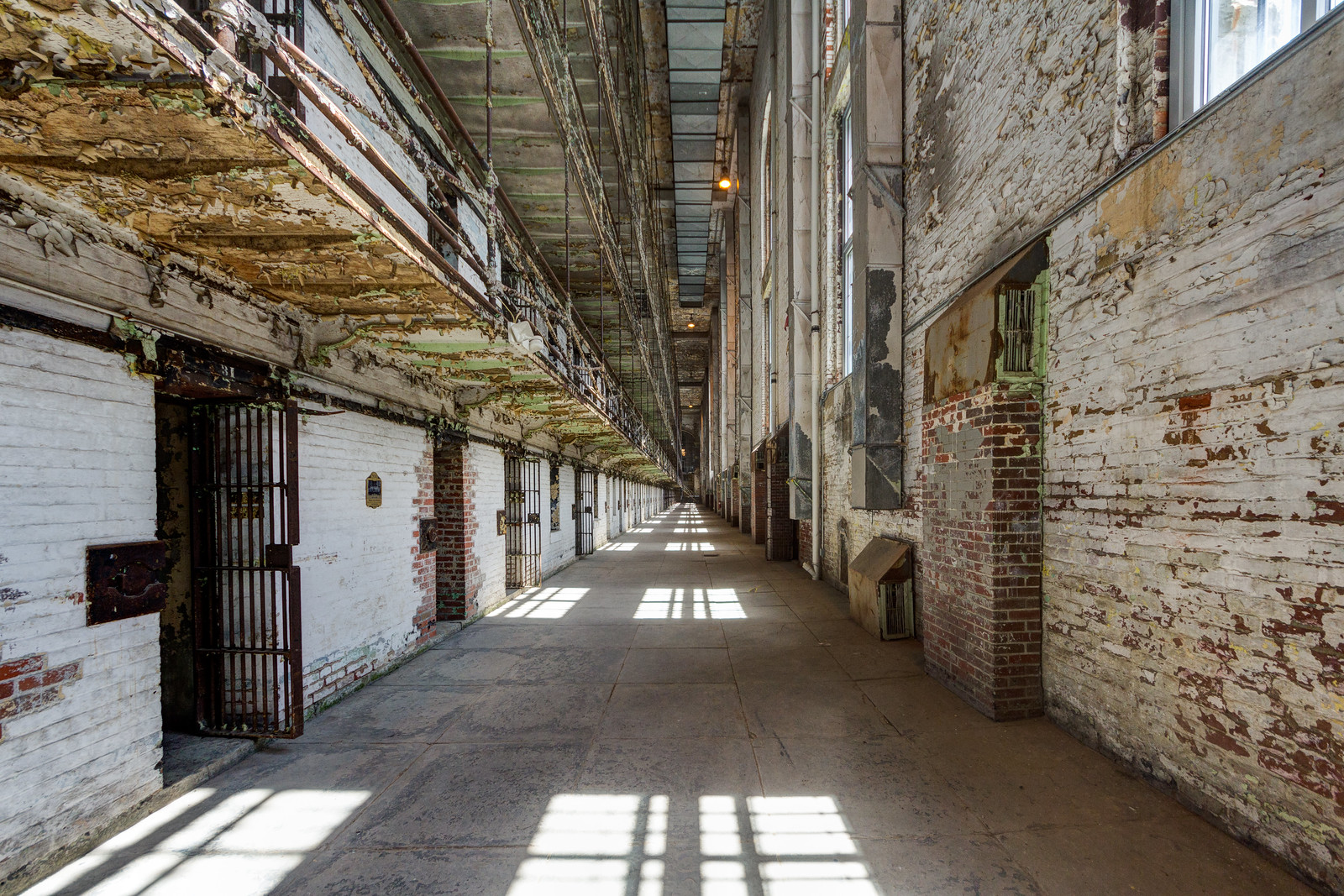 In reality, there were inmates here until 1990. Overcrowding elsewhere in the system forced the Reformatory to convert to a maximum-security prison. Generations of men languished here in increasingly wretched conditions. A 1978 lawsuit ordered the prison closed by the end of 1986, but it took another four years for the Mansfield Correctional Institution to open in its new location just north of the old Reformatory. Signs on all the north-facing windows strictly forbid taking photos of the operating prison.

You can tell the cells that were occupied in the last years. They are clean by comparison, but you still wouldn’t want to run your fingers inside the sink. The wide-angle lens makes it hard to tell, but these cells are tiny. Like, walk-in closet tiny. There are hundreds of them in two long, double-sided cell-blocks, stacked up to six(!!) tiers high.

Below is an older room. Most of the prison looks like this. Worse, actually, since most of the rooms are empty except for the bed and a corroded metal stool. The walls look diseased, and it goes without saying that the peeling paint is lead-based. The beds have been repaired again and again, using whatever materials were at hand. 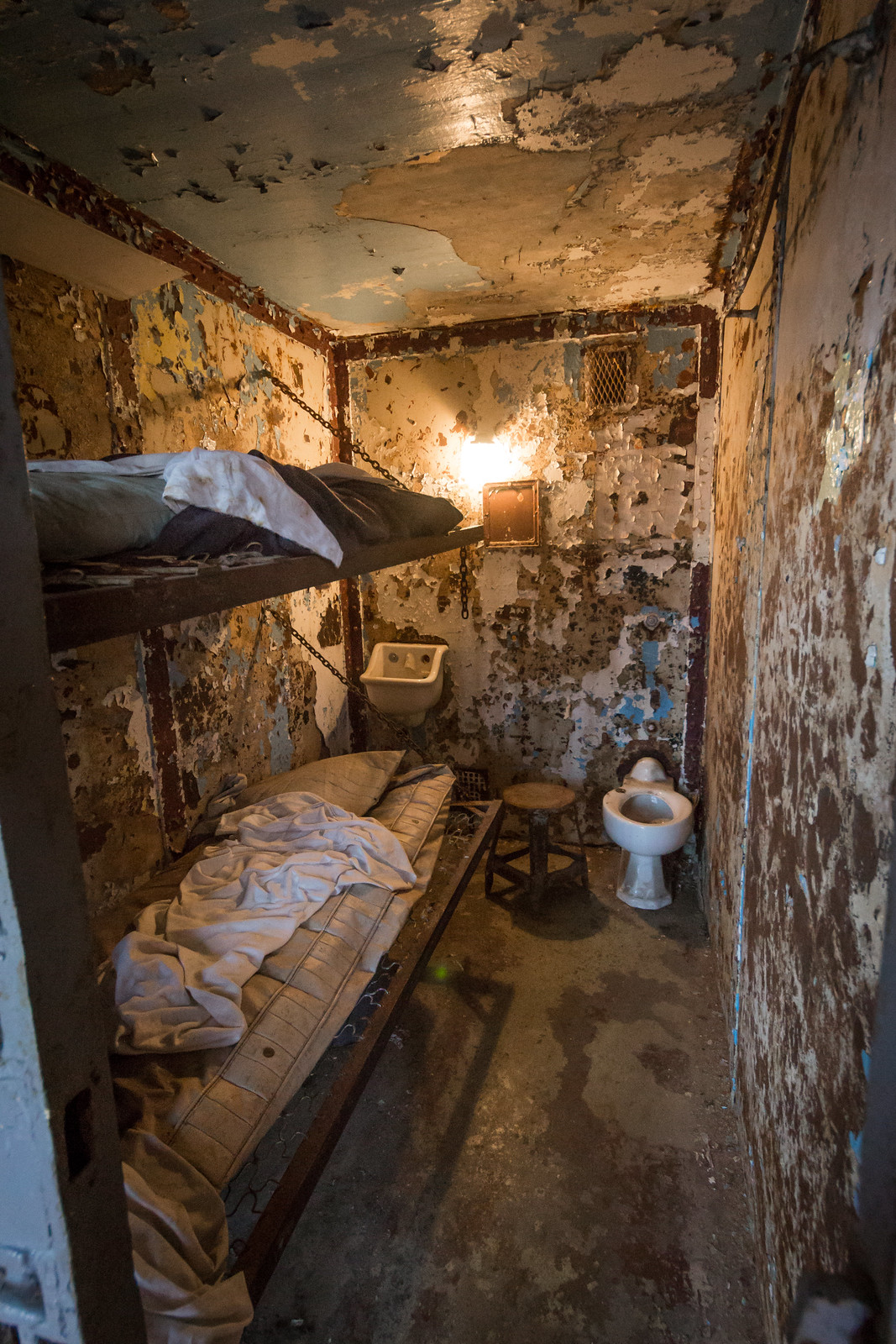 Walking the catwalks on the higher floors was a claustrophobic experience. I shuddered imagining the guards patrolling the narrow walkways, never more than an arms’ length from the nearest cell. Somehow we ended up going backwards on the tour route and we had to duck into cells to let groups of people going the other way pass. 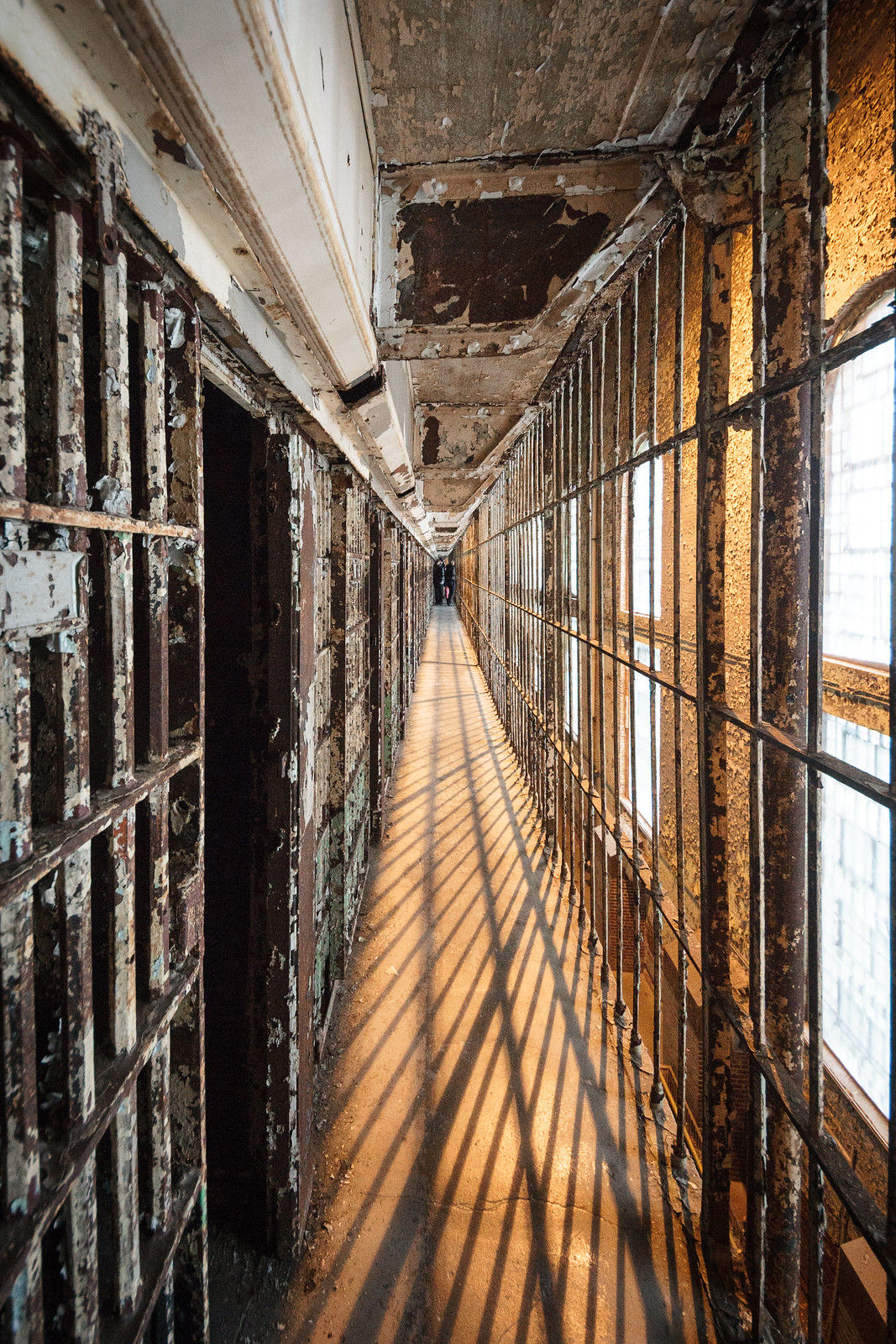 Upstairs was an recreation area and a hospital-turned-library. Some old gym equipment and chairs were all that was left behind. Broken windows and cracked walls up here let the cold breeze flood in. 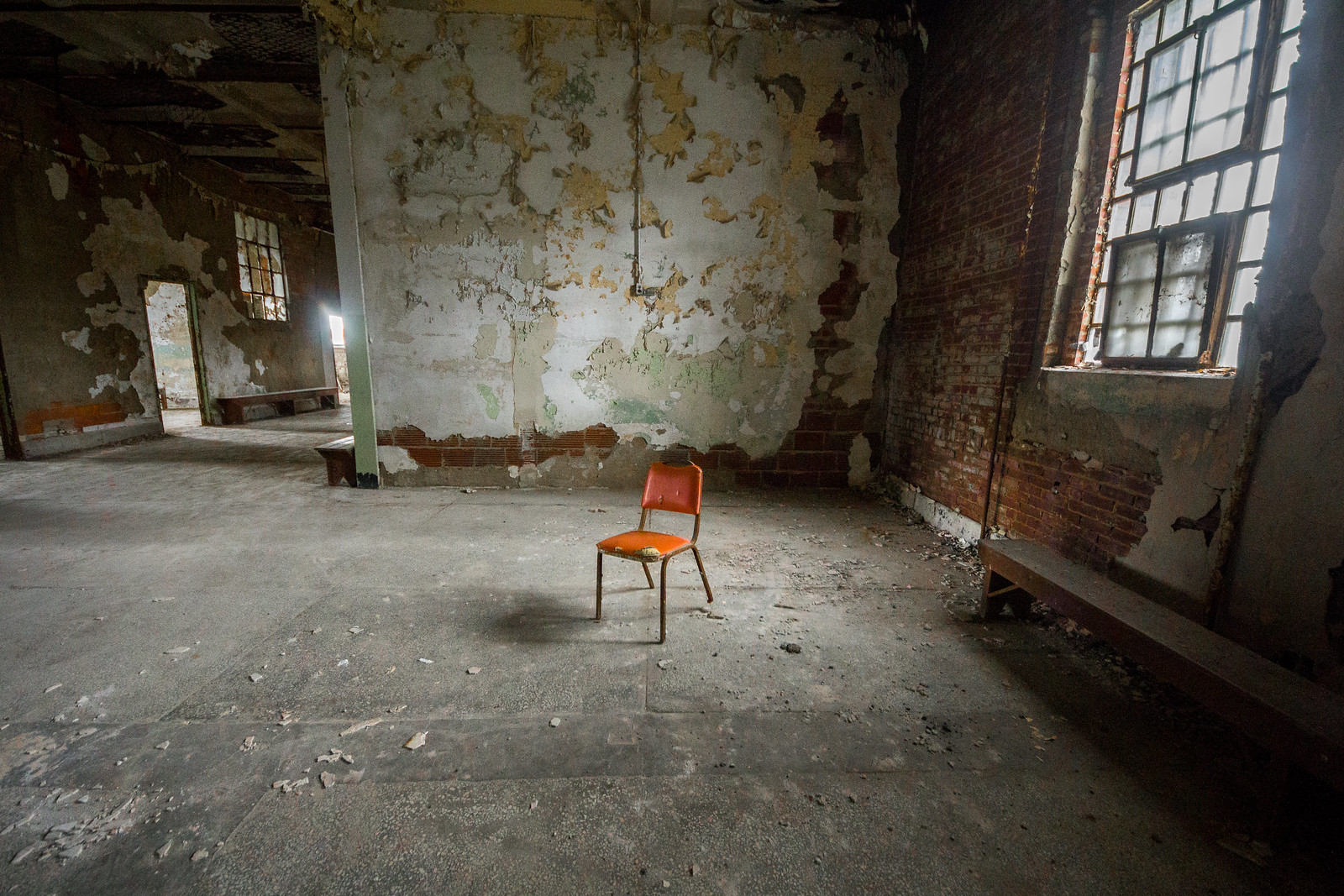 The next floor down was “the Car Wash”, the old prison shower. Once a week the inmates were marched into this room, instructed to strip, and allowed a brief walking shower. 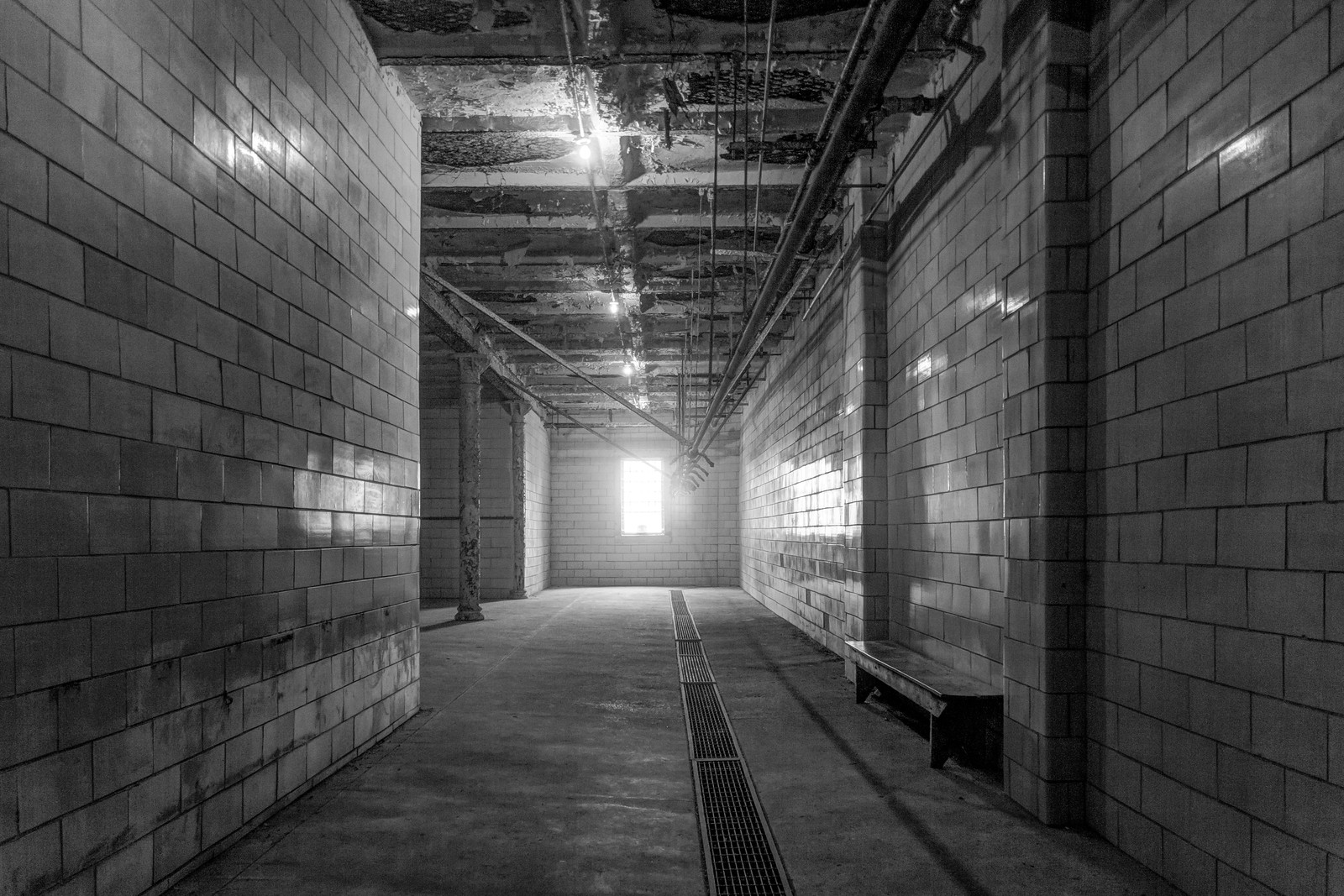 I checked the empty magazine racks in the library to see what the prisoners read. Mad magazine, Life, Motor Trend, and the National Enquirer, among others. On what had been the librarian’s desk, a copy of a 1980s Sears Catalog lay open to a page full of fancy lamps. There were books and magazines in some of the cells, too. Criminal law and psychology were popular topics. 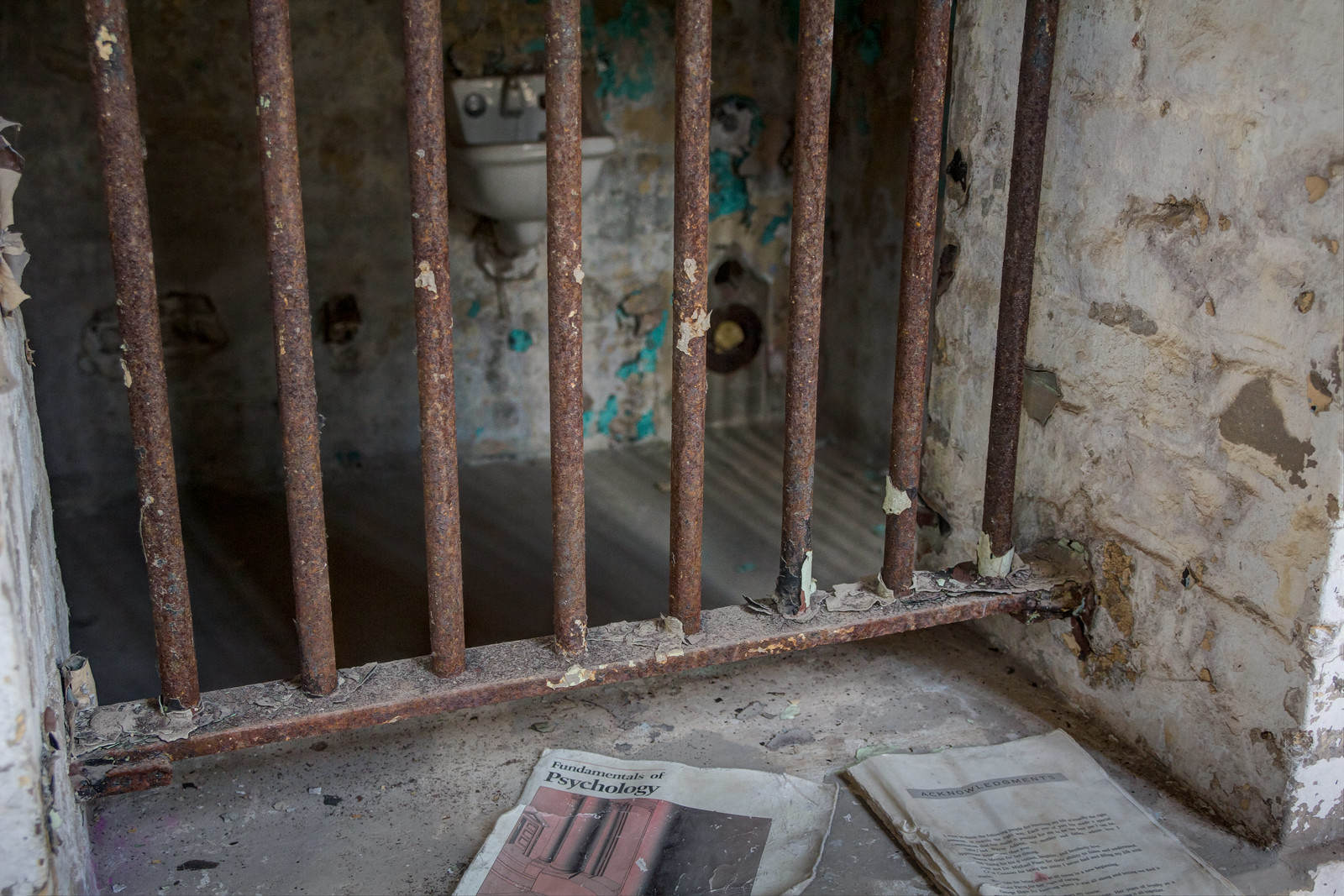 Solitary confinement was a horror show, located in the basement, with no windows and bare bulbs for illumination. The ceilings were so low that a tall man couldn’t stand up straight. It’s no wonder that many inmates, confined in the dark with nothing but a cold metal slab for a bed and a combination toilet/sink, attempted suicide. After a riot in 1957, 100 inmates were crammed into the 20 cage-like cells for a month. Fewer than 100 emerged; at least one hapless man was murdered by his cellmates.

Mansfield Reformatory is a profoundly spooky place. I don’t believe in haunting, but it’s easy to feel that something is off here. Even in the daytime, it’s hard to walk these halls without imagining the suffering of the men who were confined here. It’s a claustrophobic, cold, uncomfortable place, and a stark reminder of the awful conditions we tolerate for people we think of as less than fully human. 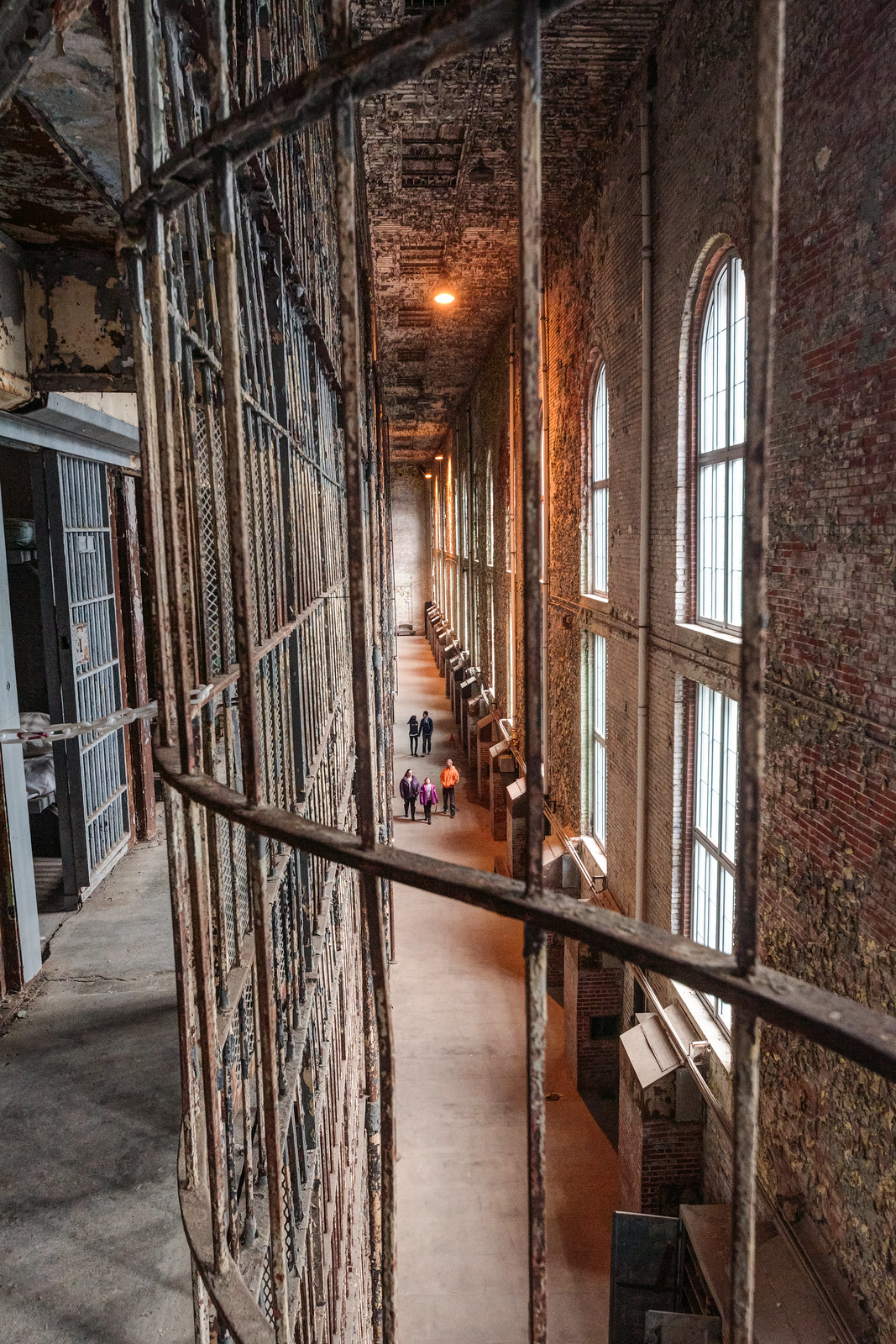 Mansfield is just off Interstate 71 in north-central Ohio, an hour from Columbus and about two hours from Toledo. If you’re ever in the area, or looking for an interesting day trip, stop by for a visit. It’s open 11 AM to 4 PM, 7 days a week from April to September and weekends the rest of the year. Learn more at www.mrps.org.